Covid-19 deaths are now falling in ALL age groups for the first time since the crisis began in England and Wales as official data reveals the week ending June 12 saw the fewest fatalities for three months.

The number of people dying of the coronavirus is now falling in almost all age groups for the first time since the start of Britain’s epidemic, official statistics show.

In the week that ended on June 12, a total of 865 people died with Covid-19, which was the lowest weekly number in three months – since March 20.

And it was also the first time the number of fatalities dropped below 1,000 since the outbreak spiralled out of control in the spring.

Office for National Statistics data now shows that the weekly registrations of coronavirus deaths did not increase in any age groups in the week to June 12.

It was stagnant among 20 to 24-year-olds, among whom there has been one death per week for three weeks, but fell in all other groups.

The biggest drop was among the over-90s, who have been hardest hit by the virus. The most recent week of data saw 127 fewer deaths than the week before, and there were 94 fewer victims announced in people in their late 80s.

Today’s data adds to figures showing the virus is retreating in England and Wales, with lockdown rules expected to be loosened further today and Prime Minister Boris Johnson claiming on Sunday that Covid-19 is ‘increasingly under control’.

At least 53,738 people had been killed by the coronavirus by June 12, statistics show, which is 11,000 more than the Department of Health has counted. In May the virus killed people at twice the rate of any other disease, including dementia. 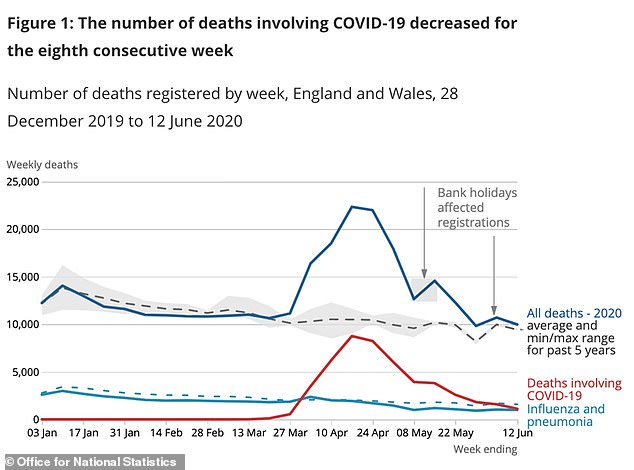 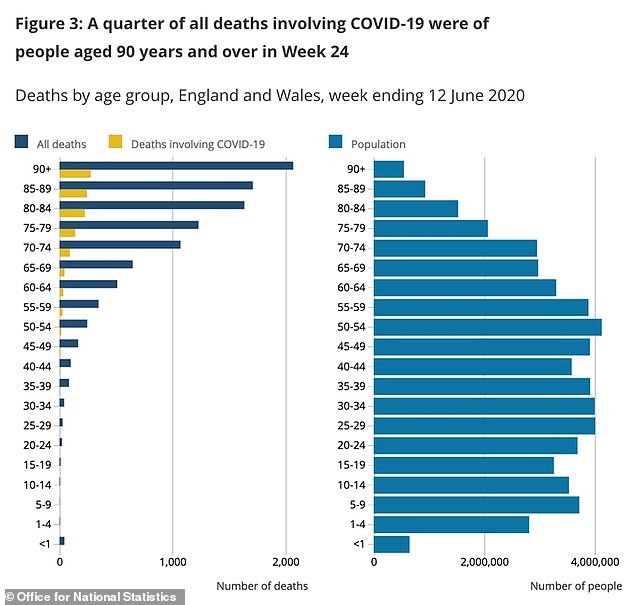 HOW MANY PEOPLE HAVE REALLY DIED OF THE CORONAVIRUS?

Department of Health’s latest death count for all settings stands at 42,647.

The daily data does not represent how many Covid-19 patients died within the last 24 hours — it is only how many fatalities have been reported and registered with the authorities.

It also only takes into account patients who tested positive for the virus, as opposed to deaths suspected to be down to the coronavirus.

Data compiled by the statistical bodies of each of the home nations show 53,738 people died of either confirmed or suspected Covid-19 across the UK by the end of May.

The real number of victims will be even higher because the tally only takes into account deaths that occurred up until June 14 in Scotland and June 12 in the rest of Britain, meaning it is up to 10 days out of date.

The Office for National Statistics yesterday confirmed that 48,866 people in England and Wales died with confirmed or suspected Covid-19 by June 12.

National Records Scotland — which collects statistics north of the border — said 4,070 people had died across the country by June 14.

Their tallies are always 10 days behind the Department of Health (DH) because they wait until as many fatalities as possible for each date have been counted, to avoid having to revise their statistics.

The total number of excess deaths has now passed 65,000.

Excess deaths are considered to be an accurate measure of the number of people killed by the pandemic because they include a broader spectrum of victims.

As well as including people who may have died with Covid-19 without ever being tested, the data also shows how many more people died because their medical treatment was postponed, for example, or who didn’t or couldn’t get to hospital when they were seriously ill.

A few words from the editors

As an independent, non-politically aligned publisher of investigative journalism for Cyprus (we are only a month old) we need your support.

Press with a Right of Reply

We always offer a full right of reply to any article, If you are the subject of any of our articles, please contact us if you want us to publish your response to our readers.

Opening statement by the Minister of Health, Mr. Constantinos Ioannou, at the press conference on the coronavirus pandemic.

Mask Salesmen Rejoice! No shopping, banking or visiting hospital without one… oh, and we’re allowing some people from the UK to come…

Nepotism for my cousin …